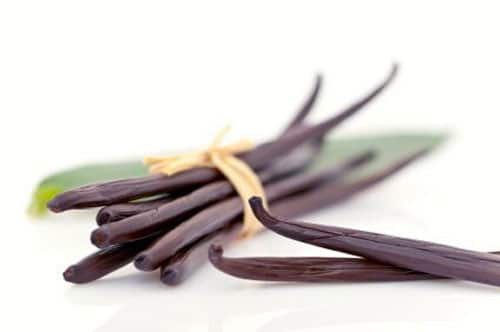 For some reason, it never occurred to me to make my own homemade vanilla extract. But as I was clicking around the internet one day, I stumbled upon an Etsy shop where a girl was selling DIY vanilla extract for, like, $30/bottle. I paused for a second and thought, why didn’t I think of that? (The making part, not the selling.)

Vanilla extract – homemade or otherwise – is literally two ingredients: Alcohol and vanilla beans. Both of which I happen to have in my cabinet.

I ran and found the 200ml bottle of Absolut vodka sitting in my cupboard (from a chai white russian experiment that never happened), so I thought that this would be the perfect project for it. I also have a ridiculous number of vanilla beans languishing in my cupboard due to a crazy internet sale that I’d found a few months ago, and this would put them to good use as well. Trust me when I tell you that one pound of vanilla is a lot of beans.

The directions are pretty straightforward: cut five vanilla beans in half and slice them down the middle lengthwise, leaving the last half an inch in tact at the end to keep the slices connected.

In an airtight glass container, add the beans to one cup of high quality vodka. Place the container in a dark place for a few months and shake it every few days. This stuff will keep forever, so you may never need to buy vanilla extract again.

Can you guess what people will be getting for Christmas this year?

And in case you need it, here’s a printable recipe.

Making DIY homemade vanilla extract is possibly the easiest cooking projects I can think of. It's literally two ingredients and two steps - maybe 5 minutes worth of work. And if you bottle it in nice little bottles, you've also got a great gift to give out for Christmas!
0 from 0 votes
Print Pin
Prep Time: 5 minutes
Total Time: 5 minutes
Servings: 200 milliliter
Author: Stephanie Stiavetti

I’m Steph, a classically-trained cooking teacher and professional recipe developer who’s going to show you how to COOK LIKE A BOSS.

Follow me for friendly-fierce guidance and training. Let's get you on the road to becoming a master home cook!

I'm a classically trained chef and cooking teacher. I can teach you how to be a ninja home cook in the Fearless Cooking Club.

Want to get free kitchen coaching?

Check out my free cooking support group on Facebook, where I answer cooking questions every single day.